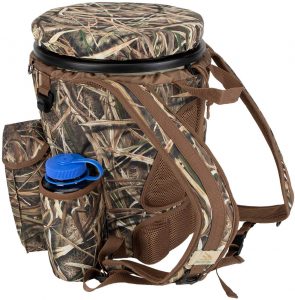 Seat, stowage, cooler—It doesn’t matter the season or the hunt—the value of a 5-gallon bucket while out in nature simply cannot be understated. Put it in a comfortable rugged pack that lets you haul ammo, calls, and utilities like a mule, and make it wildly affordable (with a lifetime warranty) and you’ve got the must have gear of the season.

The air takes a familiar turn—brisk, bracing, and bold. The nights get a little longer and the heat of the day seems to arrive more sleepily and depart more readily.

Seasons change, and with them so do the needs of the intrepid adventurer, outdoorsmen, or hunter.

Bundle up as we explore together, the best of the most practical hunting gear for the weather and hunts at our figurative doorstep. 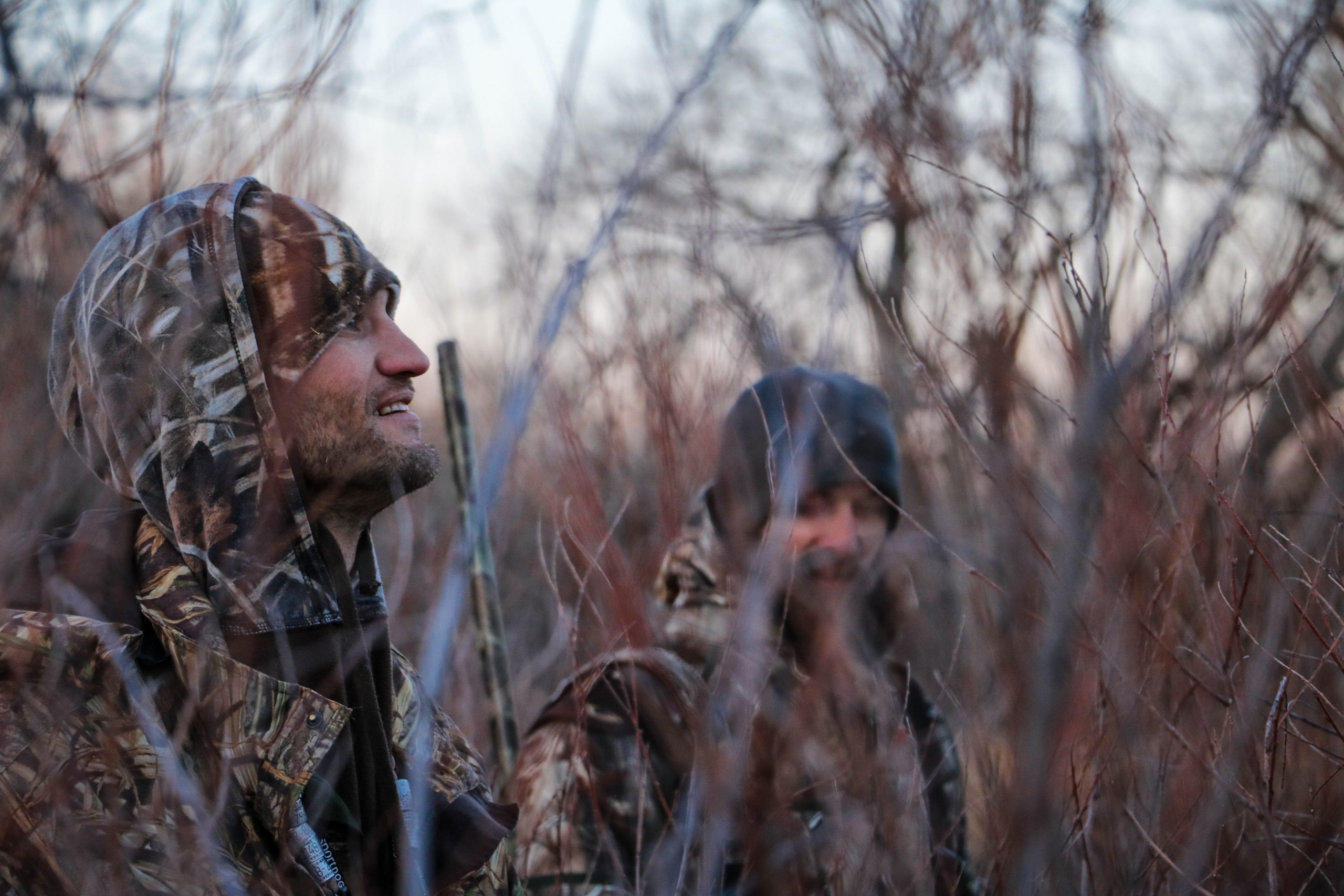 Seat, stowage, cooler—It doesn’t matter the season or the hunt—the value of a 5-gallon bucket while out in nature simply cannot be understated. Put it in a comfortable rugged pack that lets you haul ammo, calls, and utilities like a mule, and make it wildly affordable (with a lifetime warranty) and you’ve got the must have gear of the season.

The Peregrine Venture Bucket Pack is simply a practical, capable, and dependable carrying pack for a 5-gallon bucket and outdoors accoutrements.

Now if you can’t see the value of a 5 gallon bucket while out in the field, then I doubt that you are the intended audience for much on this list.

Made of reinforced and durable 12 oz. Duck Canvas, and well-padded at the back and along the shoulder straps; The unit has reinforced stitching at all stress points, and a chest strap that keeps the pack in place even when loaded to the brim.

And good thing because this beast transforms the smallest hunter into a pack mule. Deep welled and shaped pockets offers room for up to 5 full boxes of shotgun shells, two insulated one liter bottle holsters, and d-rings for calls and other accessories.

Combine with the silent swivel padded seat top, and the “No Questions Asked” Lifetime Guarantee, and this pack becomes a waterfowler’s new best friend.

Oh, and it comes with a bucket, but it will hold most standard 5 gallon units. So you can have a number of excursions prepped for immediate swap out. 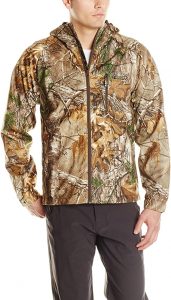 If your rain jacket is looking worse for wear, the Rocky Men’s Silent Hunter Rain Jacket is a great option for both stealth and comfort.

Rocky’s specially-designed Silent Hunter suede is an exceptionally quiet outerwear option. Crucial if you don’t want to give away your position to your prey.

Designed with Rocky Scent IQ, this jacket reduces human odor by eliminating a share of the particulate at the microbial level.

Featuring Realtree AP Xtra camouflage this garment leaves little to chance when it comes to covering one’s posterior. It might even sweep your tracks for you if you ask it nicely.

This model is taped and seam-sealed to be completely waterproof. Keeping one dry and comfortable so that they can better concentrate on their hunt. A storm collar gives your neck added protection from the wind and the athletic fit presents a narrow profile.

In short, relatively dry and invisible when that would otherwise seem unlikely. 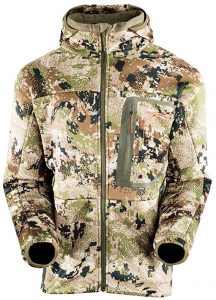 The SITKA Gear Traverse Cold Weather Hoody is a highly rated garment that does its seemingly simple but impossibly crucial task with such panache as to make the bite of the cold (or the gaze of a whitetail) almost forgettable from frequency of contact.

And this model has a built-in face mask that deploys easily for complete concealment. 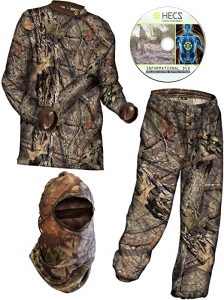 A comfortable conductive carbon grid is woven into the HECS stealth screen fabric. Producing a faraday cage that collects and reabsorbs generated EMF. Bodywide at that, as the attire includes a long sleeved top, a pair of full length bottoms, and a headcover.

The high performance material wicks away moisture and keeps you warm under your camo. Made of 77% polyester, 15% carbon fiber, and 8% spandex. This layer turns most outfits into winter kit, and winter gear into an invisible furnace that you wear. 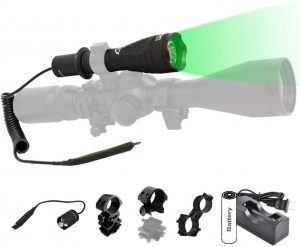 Many animals don’t see the same spectrum of light as we do. Human beings, being cunning, have devised a number of clever ways to use that to our advantage.

Hogs, varmints, coyotes, foxes, and many predators are ill equipped to detect either red or green light quite like a human can, and that is where the Orion H30 Green or Red Premium 273 Yards Predator Hog Varmint Hunting Flashlight Light Kit comes in.

Emitting a tight beam nearly three football fields long, the Orion H30 Predator is the best long range hunting light available—and let me tell you—it makes night hunting very effective and fun. You can easily spot and aim at game when they are most at ease, without alerting them. The red/green reflections off of your target’s retina are especially simple to see and target.

Featuring a Cree XP-E2 LED, it emits 100% pure green or red light without any loss from filtering. Red is least visible for animals but can also be hard for people to see. Typically hunters will use green light for hog hunting and red light for coyote, fox, and varmint hunting.

The flashlight is rigidly built to adhere to rigorous standards. Advertised as impact proof and waterproof, and with a rechargeable battery life between 4 hours and 120 hours depending on your lumen requirements.

Kit includes various mounts, battery, and charger. Juice it up and go collect the least aware prey you’ve ever hunted. 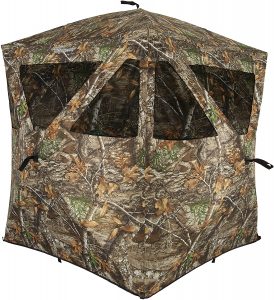 The Ameristep Care Taker Ground Blind comfortably accommodates two hunters, but its small size makes it easy to transport and deploy in a multitude of environments. Such as heavily wooded areas or waterfowling wetlands.

The Durashell Plus fabric shell is rugged yet lightweight, with an interior coating of ShadowGuard to mitigate shadows and silhouettes. All while keeping you out of sight, wind, rain, or snow.

The Spider Hub frame does more than just simplifies setup and breakdown; it also provides a sturdy, dependable frame that can weather the elements. Throw in a system of shoot-through mesh windows, and you can bet the Care Taker will take care of your hunting needs.

With four different popular camouflage patterns to choose from, there is a Care Taker blind that will suit your needs best.

Imagine it’s an hour until sunup. You—or the hunter in your life—are seated comfortably upon your Peregrine Venture Bucket Pack (Chock full of ammunition, water, and gear) in your Ameristep Care Taker blind. You shine your Orion H30s green light at the wild hogs who’ve no idea you’re there. You can see every inch of them, but thanks to your HECS faraday wear, and your Sitka hoodie you emit almost no electromagnetic signature nor aroma.

If the light drizzle turns into more serious rainfall before you head out, you know your Rocky silent hunter rain jacket is in your bucket with spare decoys.

It’s going to be a good season and you can feel it. You’ve set yourself up to succeed.

Whether you are buying a gift for the hunter in your life or gearing up for the next season, now is the time to get the best of the best before you get stuck with the rest.

The Peregrine Venture Bucket Pack is simply a practical, capable, and dependable carrying pack for a 5-gallon bucket and outdoors accoutrements.