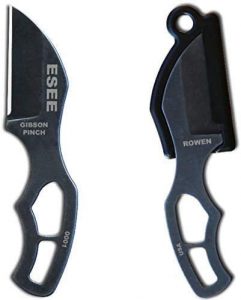 Neck knives are handy in almost any situation. They conceal well as a defensive blade. They’re easily accessible for emergency and survival situations. And, they’re always on hand for simple daily tasks (though, they might not be the best for everyday cutting).

And, there are tons of affordable neck knives out there.

SPOILER—If you’re not in the mood to look at a whole lot of neck knives, just get the ESEE Knives James Gibson Pinch Fixed Neck Knife. It’s a high-quality knife that offers excellent blade strength and edge retention for the price.

The winning neck knife gets reviewed first. All the competing neck knives will be checked off in order of price, from most affordable to most offensively priced. 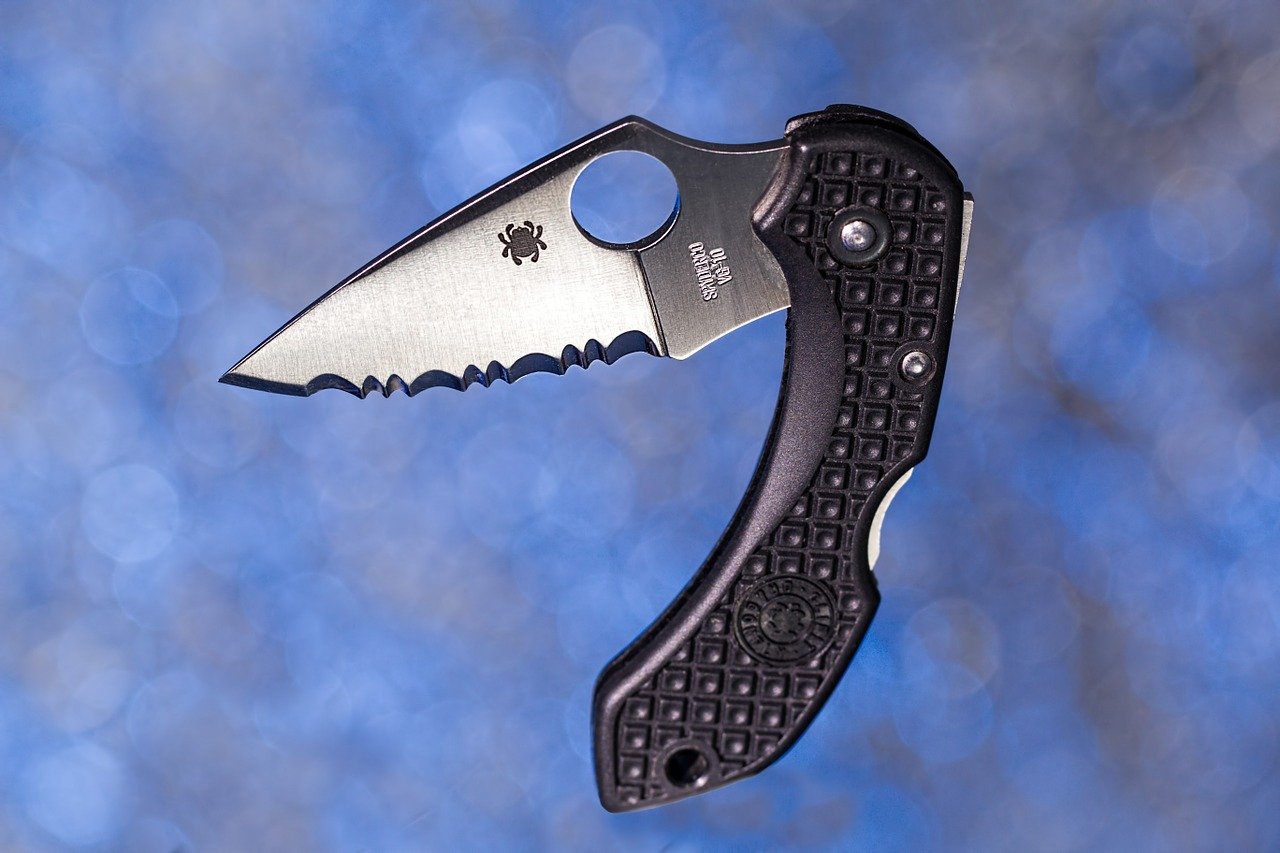 The overall length is 3.4 inches. And, the blade itself is 1.3 inches. Additionally, the entire knife is only 0.13 inches thick. It lays flat and inconspicuous even under a thin t-shirt. It’s an ideal size for a concealed neck knife that you use as a backup for a folder or more substantial fixed blade.

Also, the grip is skeletonized to make this knife as light as possible. It weighs 1 ounce. You won’t even notice you’re wearing it.

However, it might be a bit small for consistent, everyday use. Most people will only be able to get a two or three finger grip on this knife.

But, it comes with a sheath and neck cord. So, it’s ready to wear right out of the box.

The ESEE lifetime warranty is impressive: if you break your knife—ever—ESEE will replace it. No questions asked.

Lastly, this knife looks cool, because looking cool is important. It comes in a black stonewashed finish, which is rugged looking and prevents rust. 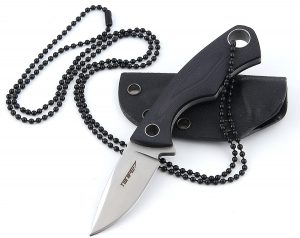 The whole blade—from tang to tip—is forged from 7Cr17MoV steel. It’s not the hardest steel. So, the edge retention isn’t super strong. But, it’s fine for everyday use, or defensive situations. However, it’s very easy and quick to sharpen.

This knife is equipped with a G10 grip. It’s considered one of the best grip materials on the market. The grip provides excellent traction even when your hands are wet or oily.

The whole knife is 4.68 inches long. The blade itself is 1.69 inches long. It’s just long enough that most people will be able to get a three finger grip—maybe four finger grip if you have small hands. So, you can comfortably use it for many everyday cutting tasks.

This knife is a good size for a concealed neck knife. However, it’s just a tad too thick to conceal under super light clothing.

But, it’s a solid neck knife for under $20. If you’re looking for a low-cost backup to your pocket knife or fixed blade, this is the neck knife for you. 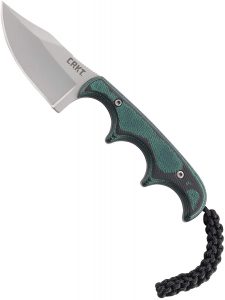 The CRKT Minimalist Bowie Neck Knife is indeed a minimalist neck knife. But, it’s also large enough to be useful as more than just a backup to your primary knife.

First things first: this knife is forged from 5Cr15MoV steel. Honestly, the steel could be better.

The bright side is that this steel is super easy to sharpen. Most of the time you can fix up the edge with just a leather strap. However, the edge retention isn’t great. It’s good enough for EDC tasks and as a defensive blade. But, this knife would struggle under arduous use as a survival blade.

This knife offers a solid design in all other areas, though.

Overall, this knife is 5.221 inches long. The blade is 2.16 inches long. So, it’s large enough for casual cutting and everyday use. And, it’s thin enough to conceal under most clothing.

Additionally, the grip has deep finger grooves to keep your hand in place during hard cutting. And, the grip features canvas texturing for good traction even with wet hands. It’s a super comfortable knife, even if it’s only large enough for a three finger grip.

This model comes with a sheath and neck cord. So, it’s ready to go on your neck, nothing else needed.

Lastly, this knife has a two-tone finish with the green handle and bead blasted blade. So, it meets the looking cool requirement.

The steel is an unfortunate choice by CRKT. But, the design and price are right for anyone who wants an EDC neck knife that’s handy as more than just a backup blade. 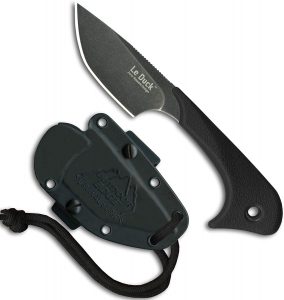 The Outdoor Edge Le Duck Tactical Survival Fixed Blade Knife is an affordable option for anyone who wants to be sure that they’ve got a survival knife on hand, no matter what.

The edge retention and toughness are good enough for hard, prolonged use. And, this blade is fairly easy to sharpen. Additionally, the steel offers excellent corrosion resistance.

The blade is 2.5 inches long. Overall, this knife is 6.25 inches long. And, the handle is long enough for a solid three-finger grip, with room for your pinky on the butt of the knife. The grip itself is rubberized for good traction with wet and dirty hands.

Additionally, there’s a super deep finger guard to keep your hand from sliding onto the blade, no matter what you’re doing.

This knife comes with a sheath and neck cord. There’s also a 360 fastener. So, you can attach this knife to anything, at any angle. However, this knife might be tricky to conceal under light clothing like a t-shirt.

The blade is Blackstone coated to improve corrosion resistance and ensure that you look cool using this knife.

The only downside is that this knife is a bit heavy at 3.0 ounces.

But, it’s a super tough and affordable blade that survivalists and preppers will appreciate. 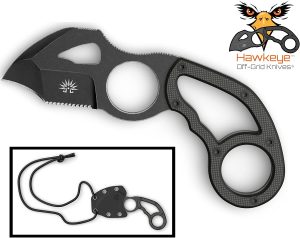 The Off-Grid Knives Camping & Survival Neck Knife isn’t the lightest neck knife on the market. However, it’s offers the lowest weight without sacrificing important things like comfort and function.

This knife is forged from Japanese AUS-8 steel. It’s an excellent all-purpose steel that’s tough and holds an edge well. However, this knife can be tricky to sharpen because AUS-8 steel takes a fine edge. And, there’s a serrated section, and the cutting edge is curved.

The blade is 2 inches long. And, the overall length is 5.75 inches. The handle is long enough for a decent three-finger grip. But, there are index holes for your index finger and pinky finger. So, you can get a full grip on this blade, even though it’s short.

There’s a G10 overlay on the skeletonized handle. It adds secure grip texture without adding much weight.

Overall, this knife is 2.8 ounces. Again, not the lightest knife. But, lighter knives aren’t as comfortable.

This knife comes with a sheath and neck cord. Just take it out of the box, and put it on your neck.

Lastly, the blade is black stonewashed for better corrosion resistance. And, the coating makes you look cool whenever you use this knife.

All in all, this knife offers the ideal mix of performance and weight for anyone who wants a capable neck knife that they won’t notice they’re carrying.

The Morakniv Eldris Fixed-Blade Pocket-Sized Knife offers the durability and utility you need from a survival knife. But, it’s super compact.

The overall length is 5.6 inches. The blade is 2.2 inches long. It’s long enough that you can get a secure three-finger grip on the handle. And, the blade is long enough for small survival cutting tasks.

But, the thing that makes this a great survival knife is that it comes with a firestarter in the sheath. You can throw some sparks by scraping the spine of the blade over the firesteel. Additionally, there’s an included neck cord. So, you can keep your fire starting kit on you at all times.

However, the fire starting kit makes the whole package a bit bulky, and difficult to conceal under thin clothing.

Even so, this is a super durable, comfortable, and useful knife for anyone who wants to ensure that they never get caught without a few survival tools. 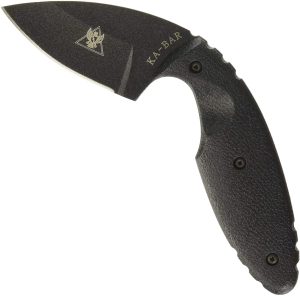 This knife is forged from AUS-8A steel. It’s a high hardness steel that offers strong edge retention and toughness. So, it will hold up to abuse and hard use. However, it takes some finesse to sharpen because AUS-8A steel takes a fine edge.

The overall length is 5 ⅝ inches long. And, the handle takes up 2 5/16 inches. The handle is long enough for a good three-finger grip. However, the blade is angled for more efficient use in tactical and defensive encounters.

This angle provides a deep finger guard to keep your hand from slipping onto the blade under stress or when your hands are sweaty. The grip is non-slip plastic. However, the grip texture isn’t that aggressive.

Unfortunately, the angled blade is not as ideal for everyday cutting. This blade is fairly specialized for combat.

But, the blade is black powder coated to prevent rust. As a bonus, the black blade also looks awesome.

In the end, it’s not a great knife for casual use. But, it’s a great option if you need to ensure that you’ve always got a defensive tool on hand.

Carrying a neck knife is a good way to ensure that you’re never caught without a cutting tool. And, a small neck knife is almost always less noticeable than even folding pocket knife. It’s a great way to carry a concealed fixed blade knife.

If you want a neck knife that’ll do the job and won’t break the bank, get the ESEE Knives James Gibson Pinch Fixed Neck Knife. It’s well priced, and made from high-quality materials that will hold up to all sorts of abuse.

So, if you’re still relying entirely on your EDC folder or fixed blade, it’s time to add a neck knife to your kit, and increase the reliability and survivability of your everyday gear.